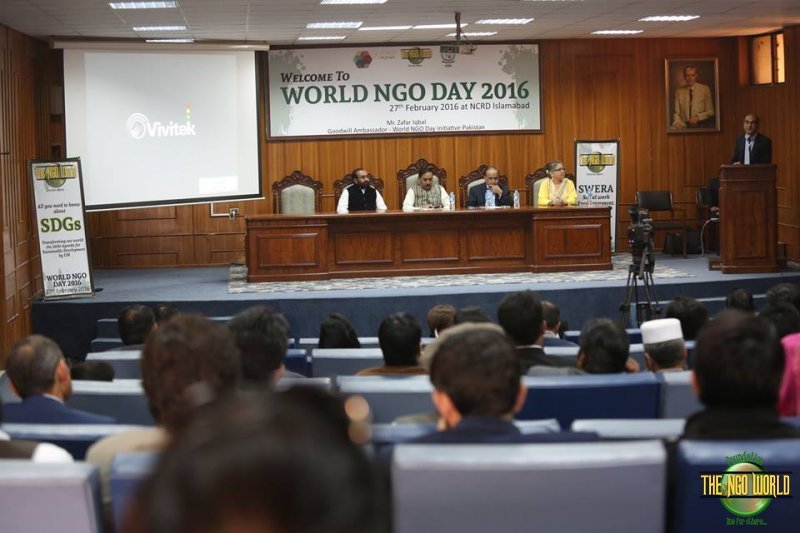 On 27 February 2016, Around 150 local and international non-governmental organizations (NGOs) pledged to continue playing their due role in bringing positive change in society and contributing toward mitigating the sufferings of the people, during the World NGO Day 2016 in Islamabad.

The event was organized to mark the World NGO Day 2016 here at National Center for Rural Development (NCRD), wherein both the local and international NGOs representative participated and reiterated their pledge to their cause of bringing change for better in the lives of poor people.

The session commenced with a welcome note by Mr. Zafar Iqbal (Executive Director The NGO World and a Goodwill Ambassador of World NGO Day initiative Pakistan). He appreciated the zestful contribution of fellow countrymen whose philanthropy remains instrumental in keeping away the chronic misery.

He further emphasized the fact that a strong networking of NGOs can produce even better results than isolated efforts. “The very idea behind the initiative of celebrating World NGO Day is to further the cause and highlight the benefits of a collaborative strife,” he added.

The event also highlighted the significance of Sustainable Development Goals (SDGs) and expressed a great degree of optimism in achieving them through a series of constructive synergies which play a vital role in uplifting of communities across the country.

The session also announced the winners of SWERA Award (Social Work Encouragement, Recognition and Appreciation Award), a documentary competition which was won by Shifa Foundation along with NUR Foundation as runners up and Pakistan Red Crescent Society (PRCS) getting the third place.