The NGO World during Earthquake Pakistan 2015 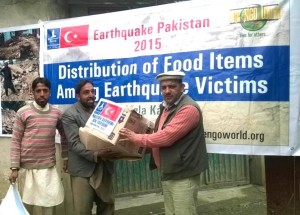 On 13 November 2015, The NGO World Foundation with support of Deniz Feneri Turkey distributed 300 food packs among affectees of deadly earthquake 2015 in Shangla.

The Government estimated that over 59,000 houses were damaged, of which 85 percent were in Khyber Pakhtunkhwa and 14 percent were in FATA. The districts of Chitral, Shangla, Swat, and Upper and Lower Dir were the most affected, and accounted for nearly 70 percent of the houses damaged across the country.

Chitral district had the most severe hit, with over 15,900 houses damaged (23 percent of the national total), leaving thousands of families without shelter. The earthquake also affected some communities that were still recovering from devastating floods, which swept through the district less than four months ago.

Chairman The NGO World Called on TIKA Coordinator in Pakistan