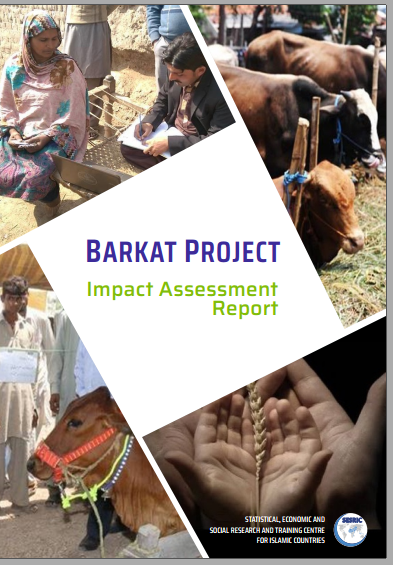 The Statistical, Economic and Social Research and Training Centre for Islamic Countries (SESRIC) was founded as a subsidiary organ of the Organization of Islamic Cooperation (OIC) has launched the report of their research on our Barkat Project titled.

This study was conducted by a research team led by Dr. Feryal Turan, Professor of Sociology at Ankara University and consisting of Dr. Mozharul Islam, Mr. Onur Çağlar and Ms. Burcu Topakbaş. This report was prepared by Dr. Mozharul Islam with contribution from Mr. Muhammed Yusuf Bilal Ata. The work was conducted under the general supervision of Mr. Mehmet Fatih Serenli, Director of Training and Technical Cooperation Department at SESRIC, who provided direction and comments.

“It can be concluded that the Barkat Project is a successful project in the field of poverty alleviation and income diversity. It could be an example for the government and non-governmental organizations working in the sector of poverty alleviation and capacity building. In addition, special courses can be offered for the university students living in the selected area with a view to develop a system and properly utilize the cow dung in order to produce biogas for household consumption”.

Outcome of the report:

The finding remarks and report has proven the expertise of TNW for implementing such initiatives. This report is an authentication from SESRIC for other organizations and institutions to replicate this model.

TNW Foundation launched a Shari’ah compliant, livestock-based poverty reduction initiative “BARKAT” by initially distributed 100 cows (heifer) and 200 goats to small home based livestock farmers on partnership basis along with provision of services related to animal health and awareness to get maximum profit.
SESRIC: The Statistical, Economic and Social Research and Training Centre for Islamic Countries (SESRIC), was founded as a subsidiary organ of the Organization of Islamic Cooperation (OIC) in pursuance of Resolution No. 2/8-E adopted by the Eighth Islamic Conference of Foreign Ministers (ICFM), held in Tripoli in May 1977. The Centre started its activities in Ankara on 1 June 1978.
In its capacity as the main socio-economic research organ of the OIC, the Centre has been mandated the task of following up, studying and evaluating the economic and social developments in the OIC member countries through preparing technical background reports and studies on various socio-economic issues of concern to the OIC member countries with a view to analysing the current situation at the OIC level and suggesting the appropriate policy actions that need to be taken in order to face the challenges and strengthen the intra-Islamic cooperation in the concerned areas.
The Centre undertakes Extensive assignments to prepare technical background reports and research studies on several socio-economic issues placed on the agenda of various OIC conferences and meetings such as poverty, education, agriculture and water resources, gender, youth, health, education, labour and employment, energy, tourism, etc.